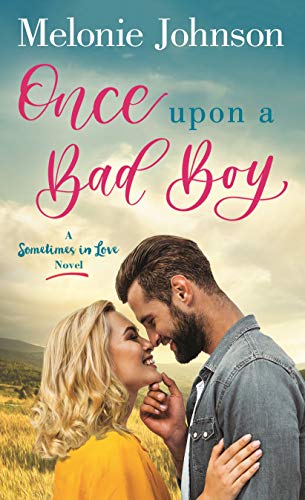 Melonie is a new-to-me author, I tried Smitten by the Brit and was ambivalent about it, but decided I’d try one more before deciding her writing style isn’t for me. Like Smitten, this was well written, but it just didn’t wow me, didn’t make me feel I couldn’t put it down. Not a bad book, just not to my taste. Others will, and do, love it.

I wasn’t really gripped by either character, they were pleasant but I didn’t feel particularly strongly about either of them.
Sadie seemed to just shut off any thoughts of Bo after their break-up, and I found it hard to believe after they’d been childhood friends, then teen lovers, and she could just not give in to temptation to take a peek at what he was doing? Or that she didn’t question him more when they broke up, things were fine and then within half an hour at Prom they’re over? Would someone in love accept that, however hurt they were? And Bo….the break-up reason. Really? It was hinted at throughout the novel, a big secret reason, hinted at constantly, but I’d pretty much guessed it from the clues, and was saddened to be proved right. I was underwhelmed by the reason 😦 I felt it just didn’t fit him. Likewise the secret Sadie holds was pretty easy to guess at, though I really felt for her the way things played out.

Similar to the other book for me the story just felt a little flat, unreal and yet already there are rave reviews. It really is a case of the book not being right for me, not that there’s anything wrong with the story. We all have different tastes, what makes it wrong for me could make it perfect for you.

Stars: Three, I enjoyed it a little more than smitten but I guess Melonie is an author who’s style doesn’t work for me.