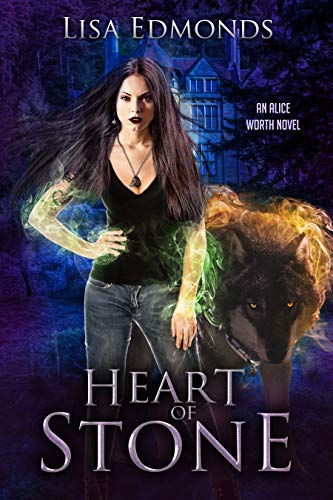 Another terrific installment to the series. Its my favourite sort, where there’s an overall story arc, but each episode is complete and wraps up this story neatly, not leaving great cliffhanger endings, but just hints of things to come.
Review of books one and three below
https://jeanniezelos.wordpress.com/2017/06/07/heart-of-malice-alice-worth-book-1-lisa-edmonds/

I love Alice, she’s come such a long way from the solitary woman we first met. She’s strongly independent and yet happy to make allies now, trusting in a few friends, Sean and Malcolm having the most trust. They’re’ two great characters too.
Malcolm works so well with Alice, his issues mean he’s a real asset to Alice, and she respects him, does everything she can to keep him safe.
Sean, Pack alpha whose Pack aren’t all happy about Alice, and in the past a couple of people have brought serious danger to them both with their actions to replace alice with someone they feel more suitable.
Then there’s the vampires, some of whom Alice has reluctantly accepted as allies, helped and accepted help. Charles seems to have some kind of feelings for Alice, that’s been clear since day one. Its not so much a kind of romantic interest, as he sees her as a challenge, a puzzle, and for a centuries old vampire things like that are important. Life must get a little bland after so many years, an intellectual challenge of working out who and what she is, keeps life interesting for him. Like all vampires though, that doesn’t mean he’s trustworthy. They’ve got a kind of understanding currently, where both have helped the other and feel…well…a sort of friendship even if on Alice’ side, that’s kind of guarded.

Once more we’ve a tightly woven adventure, bringing in issues from the past and setting up more for the future.
Alice is hired to find a missing child, an unregistered one, with rare talents that would make him a target for unscrupulous cabals. She can’t just abandon a child, even though finding and rescuing him once more puts her life in danger, and this time maybe her long hidden secrets too.
If they come out how will those around her react? What will it mean for her relationship with Sean? And will it make her an even bigger target to the supernatural world than she currently is?

Stars: Five, another cracking read, and i’m keen for more. Some series tire as they continue, I can see Alice has lots of adventures to go before that happens 😉 hurrah. If you like fantasy with a side of romance that doesn’t dominate, just supports the story this read is one for you.
Book via KU. The whole series is currently available on KU and its one worth reading