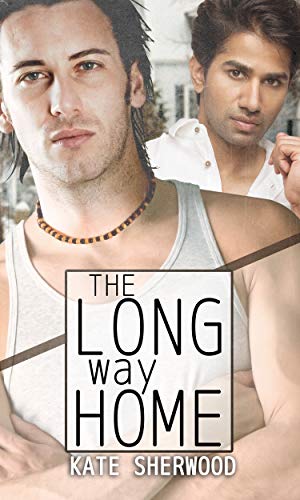 I’ve enjoyed several of Kate’s novels and loved the prequel to this one, The Mark of Cain, so was delighted to be offered this for review.

Sean is an incredibly bitter individual after the accident, which caused him to lose both legs. He was pretty awful before the accident, homophobic, angry, racist and one of those folk most people try to avoid. His best friend Luke ( from Mark of Cain) is in a relationship with Mark, an ex priest, and Sean finds that difficult to accept, but he has respect for Luke, one of the few people he listens to, and Luke knows how to handle Sean.

Sadly for Paul, he’s gay, he’s coloured and he has Sean as a patient. Sean is full of anger, full of bile, he hates what his life has become, dependent on others for so much and as he sees it, no future, he’s got nothing to live for. I’m an amputee, though thankfully only one leg, and I wasn’t like Sean pre-amputation. Still, that change from being independent, working full time, looking after my family to losing a whole leg, losing my job, being so dependent came as a shock, and like Sean I felt at times death was a welcome way out.
I remember the first night after the op being in tears because I couldn’t even do a simple thing like turning over in bed anymore, had to be helped. So even though Sean seems irredeemably awful I have a little sympathy for him. He should have a future of possibilities stretched out as he’s in his early twenties, and yet he feels he has nothing left to live for. When he’s as horrible as he was to Paul though even my sympathy was stretched.
Of course Kate seems to excel at making the most unlikely people fall in love, but this seemed one that I thought even she couldn’t do successfully. I was wrong 😉 somehow she brings out the best in Sean, doesn’t turn him overnight into a saint, but with the help of Paul and Luke he finds life is still worth living, that he hasn’t lost everything, and whilst learning that he finds another side of himself that he likes better.
He’s still angry, still lashes out without thinking at times, still misses a fight, but the good things in his life balance it. I was glad she didn’t change his basic nature, that wouldn’t have felt real, the Sean we get to know through the end of the book is still the same guy, but re-balanced, the best in him was there all along but hidden, now its the worst bits that are still there but hidden.
Then there’s Paul, a dutiful son, very much in the family mould, his only rebellion was his career, he just couldn’t face life in the family business, successful though it is, and he wanted to choose his own future. He’s in what his family see as a good relationship with Bobby, seems to have life set out for a happy future, but is feeling as though Bobby doesn’t really understand him, but his family are so happy about his rich, successful boyfriend and their relationship he’s not sure what to do, is it easier to just go with the flow?
And then there’s the kittens…..who are the catalyst (that was unintentional!) for a host of changes.

I really enjoyed this story, seeing how Sean came to terms with his loss, how Paul learned to stand up for what was important to him, and of course meeting Luke and Mark again, knowing that they have made a life together successfully, meeting Elise again and seeing her sanctuary still going well. And the kittens, stars of the show, I fell in love with them.
At the start I was pretty convinced Kate wasn’t going t have me believing in this love story, it seemed a step too far, and yet by the end I was convinced, what seemed an impossible challenge wasn’t.
I felt too that the feelings Sean had and the struggles he faced with life after amputation were so very real. I’ve been down the road, albeit I am fortunate in still having one leg, and Sean’s emotions and physical problems were ones I’ve also faced.
I can’t really pin down why this isn’t a five star read for me, could be my subconscious feelings over mine and Sean’s shared issues – though it was all written perfectly, there are still days when life is a struggle for me, and I think unconsciously that bias has affected how I feel over this story. One of those Its me not the story issues others won’t face but I do.

Stars: Four and a half, not quite as gripping as Kate’s other stories but a solid, engrossing read once more.