The Night You Left, Emma Curtis

The Night You Left, Emma Curtis 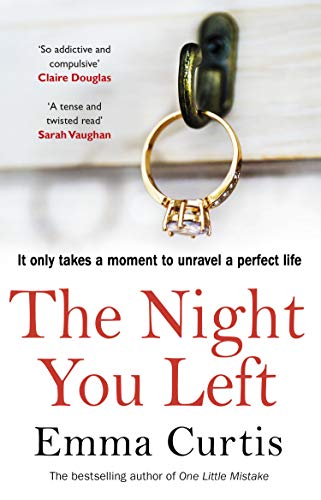 Moan: women’s fiction – why alienate potential readers? Men write books enjoyed by women and men alike, and they read the same.
I was on the fence about this, I love books about missing people, makes me wonder what happened, why, what were they thinking etc but there were a few reviews that made it sound not my kind of read. Still, took the plunge and really enjoyed it.
Unusually for me the majority of the people in this were irredeemably awful, and usually I need to like the majority, though enjoy a few bad to the bone folk. The only one’s I liked ( apart from Lottie and Kai) were Nick and Grace.
The book flits from past to present, at varying times and occasionally I needed to backtrack to see just what time we were in. I felt for Nick as a teen, his parents even then were self obsessed. Taisie, typical kid in her actions and if any of the parenst had looked beyond what she wanted them to see they’d have put a stop to things. Fact is none of the parents were really bothered what the kids did so long as it didn’t interfere with their fun. Pretty rough, and of course had some terrible consequences, not just immediate but long term.
Where the story fell down for me was the timing, with everything from years back coming together over just a few days. there’s a saying that truth is stranger than fiction, so to a degree I can deal with what seems like just too much co-incidence but in this book there really was a bit more than I could believe in. Still, I wanted to see what happened to Nick, couldn’t believe he’d just walked out but that’s what it looked like and I wanted to know why, and if not, what had happened. Its actually something that happens very often in real life, people do just walk out, start another life, but I didn’t feel Nick would do that. He seemed to adore Grace and Lottie, and even when Grace began to find out the secrets he hid I still don’t feel he’d just walk out. As things come to a head more and more long held secrets come to light, bringing in some very real dangers.
Its a nicely paced story, letting things come to light slowly, and though I’d guessed some of the things that happened, there were others that came as a real surprise.

Stars: Four, a story that had me reading “just a bit more” needing to know what happened. I do feel some events stretched credulity too far and that’s what stopped the five rating.