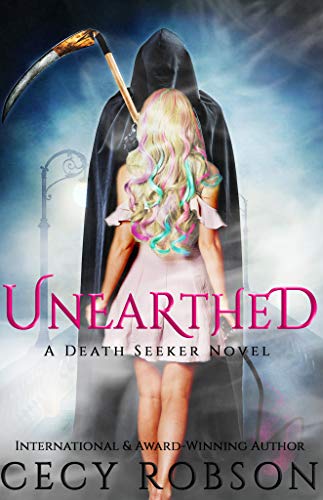 I love Cecy’s stories so was keen to read this but…I did find it confusing at times. Its got that “first novel in series” issue that often happens, where there’s so much to deliver, story, world building, type of character and what magics they have, that it can easily get confusing.
Everything here is so very different, for example Olivia is a pixie, but living among humans as so many of the Fae are, but undetected. She has magic that’s so far unknown but when it does come its kind of typical Olivia, she of the rainbow coloured hair has pink magic, deadly, dangerous magic, but pink.

I really liked Olivia’s spark, loved the humour in the book, the loyalty she inspires. I loved Jane, a fellow magic user, an Elder, but who communicates in somewhat different ways. Then there’s Ryker…swoon…who turns out to be more than just a heart throb top legal expert.
There’s a terrific cast overall, some much needed humour at times among all the death and destruction that lifted the tone just when I needed it. I had a hard time believing that all that devastation could go unnoticed by humans though, and it wasn’t really explained that well. A couple of times early in the book we get to hear what story has been put out, but later on when the destruction is massive, I didn’t find any explanations of how humans wouldn’t have noticed, or what they would have thought.

I did find the constant battles with the hell hounds a bit wearying, and too graphic for me. I know it wasn’t easy killing them, I know the deaths they caused weren’t pretty, but after the third time of reading just how they dismembered victims I got the picture, didn’t need a blow by blow account full of gore and detail every time. I ended up skipping those parts, and of course there lies the danger I may have skipped something that’s later a major part of the story.

I enjoyed this story but wasn’t riveted to it. I think its one I’ll come back to further on in the series when I understand more, and get much more from it. For now I just feel a bit overwhelmed by such complex events and characters. Its a three star now, but I suspect when I’m more into the series it’ll actually be a five star read. I’m just still a bit confused and bemused…
BTW thanks Cecy, no awful cliffhanger, my bête noire . This story ties up with indications for future books and that’s just how I like a book in a series to end.

Stars: Three, a story that’s complex, and I found a bit too packed with world setting, new events and characters. I feel when I understand more of this world I’d probably rate this a five but for now its a three.