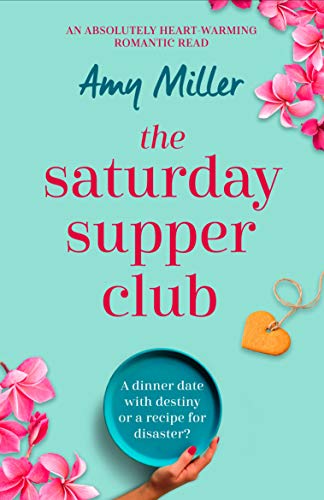 Bah, Humbug. Women’s Fiction – that infuriates me. Why do we insist on having such an outdated category?
Anyway, the book. Well, I love a second chance romance, and when characters stories are unfinished like this I want to know how they will end when they meet, will that second chance take, will things work out or has too much changed.

Sadly it wasn’t a great read for me. I love the cafe and how that was being set up, liked the idea of the supper club. I somehow felt the execution was lacking though, given the title, it didn’t really take a major setting.
I found most of the characters strange, except for Eve’s dad and his girlfriend. Though even Dad’s actions were not right either over one event, he meant well but it was wrong. Eve was shilly-shallying between the two men, not really being fair to either. I don’t like that behaviour, even though I understood her need to know, her shock at meeting Ethan again.
Some odd events are disclosed when Ethan finally reveals why he left and his excuse – well, it gobsmacked me. Really? She was upset so you …?? and thought it wise to cuddle someone in those circumstances? What a berk, what a stupid man. I’d have never been able to trust him again.
There are times when things happen between couples that make me feel there is some exoneration, even though its wrong but this? Nope. Out Of Order Ethan. Then he took cowards way out.

I thought Joe was great at first but as we came to know him I found him a bit creepy, manipulative…and then of course things come out that confirm that for me.
Daisy – well, with friends like her who needs enemies is all I can say. Even when the story comes out she’s still “poor me” “ I loved him first” even though he never had anything other than friendship with her.

Overall there were some interesting parts but the characters let it down for me, I didn’t really like any of them, and that spoiled the story.

Stars: Three, I just felt with a bit of tweaking it could have been a great read for me but then I’m sure others will love it as it is. Horses for courses etc.