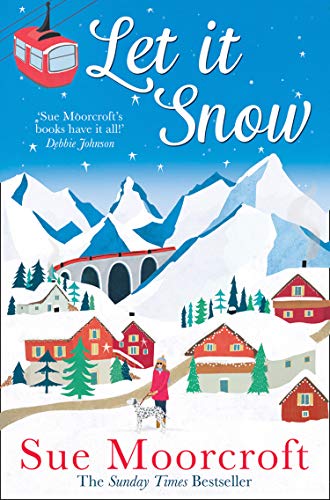 Well, I was late to the Sue Moorcroft appreciation group 😉 but she’s the kind of author whose books are worth reading multiple times. They’re so packed with mini plots, secondary characters, fascinating dialogue that I know on subsequent readings I’ll pick up things I missed this time round.

As usual its not just one plot, one strand of story but lots. I love that in a story, keeps things exciting. Some books are single plot and I find that can mean the story becomes a bit dull, fixated on one event but here we flip between plots, many of which prove ultimately to be connected.
Fabulous charters too, that make the story feel so real. They’re the kind of folk you find in any village, with all life’s dramas, the everyday issues we all face at times. There’s Lily, Zinnia and the two mums, and the issues that’s brought for all of them, and then Lily discovering her two half brothers, and what she should do about that. They have no idea about her, the mums and Zinnia are feeling a bit rejected, even though Lily still adores them. I guess that’s natural, how most parents would feel when their child wants to search out other family members. Til now they’ve been a tight knit unit of four, what will happen when Lily finds them.
Of course its not straight forward, Lily finds Harrison Tubb ( known to all as Tubb), he’s a well liked genial landlord of a village local, and she gets a job with him, intending to tell him who she is when time is right. Its never that straightforward though, and that simple quest gets more complicated as she falls in love with Isaac, who’s minding the pub while Tubb recovers from a heart issue in Switzerland with his brother. By now Lily has been at the pub two years, part time, while building her own business. That brings in an opportunity to work at an event in Switzerland, via Tubb and his brother Garrick, who still don’t know who Lily is to them.
Then there’s the singing group, who are also on the Swiss trip, singing Christmas songs, the other villagers, Isaac and his ex Hayley, and of course their dog, Doggo. He’s a real star of the book, so typically Dalmatian, full of exuberance.
Everything comes to a head just before, and on, the Swiss trip, its multiple dramas pulling Lily from all sides. Perfect read for me, I adore that kind of drama that makes you think, how can they get through this, will they even, or are the odds so stacked against them they won’t?

Its a perfect read for me, full of people and issues that feel so real and one in particular is handled very well, an illness that touches many of us. I’ve read similar plots in other books where it feels like its been brought in to add drama but just isn’t handled well, with parts being very unrealistic. Having had an illness similar myself I appreciated that this was written sensitively but realistically.