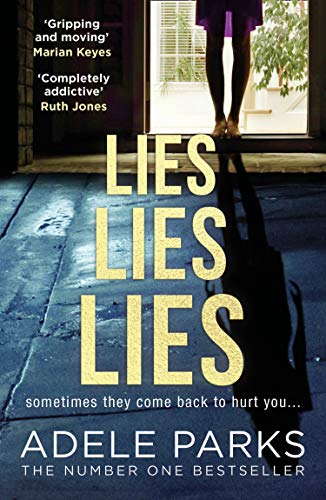 Bah, Humbug. Women’s Fiction – that infuriates me. Why do we insist on having such an outdated category?
Well, that’s out of the way so on to the book…I loved it, though at the start I thought it was going to be just meh!

Daisy and Simon seem top have the perfect marriage, adore each other and their talented daughter Millie, both have good jobs, a nice home and long time friends that lead to a good social life. Then we see a few cracks appear, the friends have a few issues, Daisy carries a grudge against one of her college friends, kept it up for the last 15 years even though the parties have all moved on. Lucy had an affair with Daisy’s sisters husband, she’s now married to him and they have a child, and Daisy’s sister is also happily married but for Daisy its an unforgivable breach. They all still meet, having friends in common but Daisy avoids Lucy as much as she can. For me this characterises Lucy’s nature, she has strict codes of right and wrong, and is incredibly loyal. This loyalty spreads to Simon when he drinks too much, he’s a functioning alcoholic and for the most part is more or less in control, always the life of the party, always a fun guy and he adores Daisy and Millie. So much so that he thinks they should have another child. It took a while for them to have Millie though, and they’re older and seek medical help. After that his alcoholism really takes over his life and Daisy just doesn’t know what to do. I really began to dislike Simon here even though I felt sorry for him. I sympathised with Daisy, been there, done that and its tough. You love someone but don’t necessarily like what they do.
Gradually the issues get worse, until things go horribly wrong. Their lives all change irrevocably, and the secrets that have been stacking up increase, there are outright lies and untold ones, lies of omission. I so felt for everyone, and the people I least expected to help stepped up, showing the power of true friends.
You need to suspend believe a little to really get into the story, when the secrets and lies get revealed and the consequences come out, but then as they saying goes, Truth can be stranger than fiction, so who knows?

A gripping read, full of unexpected events and turns, and a fabulous story. The characters felt very real though in my head, their actions very true to form. I guess I thought of them very much as “Boden Catalogue” families. UK readers will understand that, the Middle classes, university, property owning families. I’m making that point as a fact not a criticism, its just a type of family, as real as the landed gentry type and the families that never get beyond renting homes, where a stable job is an aspiration. Adele herself makes the point that Simon isn’t the typical prisoner, and sadly she’s right in that some people seem almost destined for a life or crime. The prison section, prison life, how easy it is to become accepting, institutionalised, how the hierarchy of people like the Dales who run the prisoners and some of the guards, even though they are prisoners themselves was very realistic. She’s celalry researched the prison rules for visitors etc, I learned a lot I didn’t know about visiting rules. I find when authors do that research it leads to a much better reading experience for me, that I can enjoy the realism of the events more, feeling that this is the way life, and in this case prison life, works.

Stars: Five, a brilliant read, very emotional, very well put together, turning my feelings about characters completely upside down. The ending – a little hard to believe but for me it was what I wanted so I’m happy even if its a little stretching credulity.