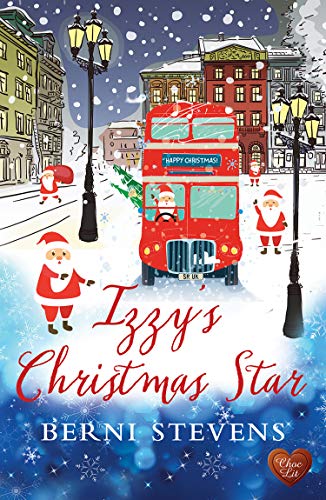 Well, this was a fun read, one of my favourite genres, the rock star trope and of course choc-lit always deliver for me so I was looking forward to this.

Its an easy read, nothing too dramatic, a simple story. I really liked the characters, and the Santas added a quirky touch, but the lack of real drama made it a four star for me, not the magic five.
I was reading through, hooked onto what would happen next and about the three-quarter mark I was waiting for something to go wrong, as it usually does. Sadly for me its one of those reads where it doesn’t, it just charts the track of a sweet romance.
Izzy is a sweet character, felt like someone I could know and like. Seth too was past the rock star bit, and finds Izzy refreshing, not the shallow type he’s so used to. I loved the Christmas gifts too and the little touches like the impromptu Christmas concert. I love books set around this time of year, there’s something special and its easier to believe in a little supernatural help from Santa 😉
There was the potential for some fireworks with an ex that won’t let go, but rather than any huge whizz-bangs its more of a wet sparkler effect. That could have developed into some real dramatics, and I was hoping, but doesn’t 😦
Still, that’s me, I do love some drama and heartbreak in my happy stories, though of course they need to end well or I feel cheated 😉 It has the perfect happy ending.

Stars: Four, a read I enjoyed,perfect to curl up by the fire and read on a wintry day. I’d need a bit of extra drama and heartbreak for a five, but four is well deserved.