The Captain and the Best Man Catherine Curzon, Eleanor Harkstead

The Captain and the Best Man Catherine Curzon, Eleanor Harkstead 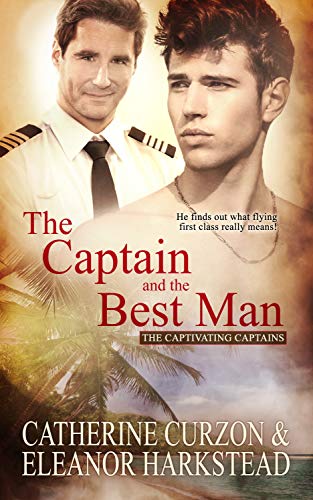 I haven’t read the earlier books in this series, but that’s fine, each are stand alone. Its one of those series connected by character type rather than the characters themselves.
Its was a fun story, very easy to read, with some fun characters.

I liked Guy and Josh, Guy seems universally liked by his flight crew and the islanders. He seems one of those genuinely naive guys who somehow glide through life untroubled. Yet as we learn more about him we find its not been quite that easy for him. Then there’s Josh, one moment he seemed very young, and the next it was like he had an old head on young shoulders. There’s a real attraction between the two that came through the story quickly.
The story itself hinges on Josh’ best friends wedding, a tropical island and of course a storm, and not just with the weather….it was kind of easy to see where the story was going, see what was going to happen from about halfway, but maybe that’s me, maybe I’ve just read too much….
I guess my big issue with the story is that the main thrust takes place over a couple of days with the whole mostly complete in a week, and I just found that insta love too much. That’s my personal issue, I need to be convinced characters are in love, not just lust and when every interaction is so new, so coloured by sex then I’m not persuaded that its actually True Love and worth all the sacrifice. Though this wraps up so well that actually there’s very little sacrifice 😉

Stars: Three, a fun, easy read, but its just too time condensed for me to really get mentally involved with the characters, and invested in what happens.