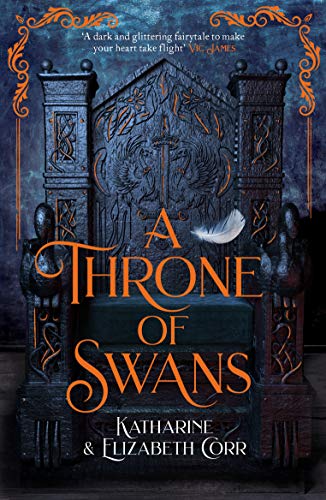 Well…Wow, what an amazing read. It’s classed as teen and YA, but one of those rare few that really appeal to all ages, not just the younger generation. Like Vic James Dark Gifts, or Sarah J Maas a court of ….reads, they are reads to treasure, to reread no matter what age you are.
I’ve never actually read/seen Swan Lake but I guess everyone knows the basics, and I was hoping this wasn’t just going to be a retelling of the story. That doesn’t work so well for me, but I was happy that its Swan Lake inspired but has a story of its own. There were magical scenes, interspersed with some pretty horrific stuff. The Corr sisters don’t shy away from some solid hard facts in the world they’ve created, where those With get to do pretty much whatever they want to those Without ( flighted and flightless in the main). There’s some harsh rules in this world, some that feel almost arbitrary and yet for decades, centuries they’ve been uncontested.
I loved the world created, with its mix of characters, with its people that can transform into birds, with the sheer political intrigues, when grew almost faster than I could read them. Just as I was thinking one thing something happened that threw that chain of thought into disarray.
There were some fantastic characters. Aderyn’s clerk Lucien, tells her “trust no-one” but its hard for her. Lucien has been used to the cut and thrust of royal politics, of the machinations and intriguing that take place constantly, but Aderyn hasn’t spent time at court, hasn’t actually been anywhere since her mother was killed years ago and the injuries and shock left her unable to transform into her Swan shape. In this world that’s something that would get her removed as protector and could even threaten her life if it gets out.
When they first go to the Royal Castle Aderyn is just determined to find out who killed her mother, who was behind it, but the first day isn’t over before she discovers she’s treading on very thin ice, that she needs her wits constantly. Lucien had warned her but she doesn’t like him, and hadn’t realised just what danger she was in. She’s good hearted but at first had been so sheltered she’d never realised just what else was going on in her world, how the flightless were treated in other dominions. She assumed all were like her father, that they were treated fairly, but soon sees unhappiness and cruelty surround her. She grows up very fast, from that naive 17 year old we first meet, to the girl at the end of the story who’s had a sharp shock about the world she inhabits, who now realises just what it means to be a Protector.
And speaking of the end, what an incredible bounce of surprises those last chapters brought. They kept coming, one after another, after another! I hope book two is around soon, I am desperate to know just whats going to happen, how things are going to come through, and suspect its going to get worse before it gets better.

Stars: Five, an amazing read, full of a magical world, intrigue, politics, interesting characters, and one to reread when part two is out.