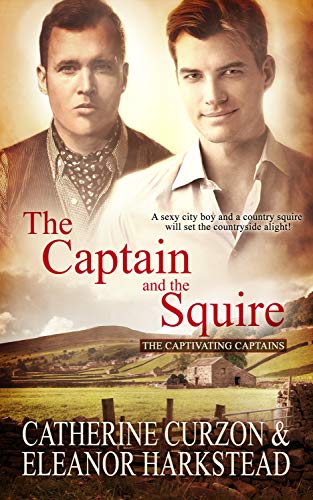 Well, I’m late to this series and have only read the previous book. I struggled with that so was hoping this would suit better – and it did. It was timing in last book that was wrong for me. I don’t really gel with books where everything takes place over a few days, but this one is longer, still short, just a month except for the epilogue, but it worked so much better for me.

I loved the way Tarquin and Chris are at odds from the moment they meet, and yet that magical thread of attractions pulls to them both. That meeting should have clued me to what sort of story this was going to be, but it took me a few more pages to realise that it really was tongue in cheek stuff, perfect schoolgirl humour that somehow I’ve never outgrown!
Chris is new to the area, although his family and Tarquin’s have been in Bough Bottom for generations. Tarquin is a long standing resident, local farmer, with the most horrendous fiancee, Petunia. She was so perfect in the book, adding a nasty edge to the spice and nice 😉 along with her boss, the awful Bryan.
If you’re thinking Romance, sensuality and emotional story – well, the emotion you’ll be feeling is tears, but tears of laughter. At times this feels like a Brian Rix ( now I’m showing my age) farce, it’s slapstick type comedy, so overdone that it works. There’s a fine line between slapstick funny and in your face OTT jokes, and the authors have found it perfectly.
From the countryside squire Tarquin portrays, trilby, tweeds and tractors, very typical stereo-type, Chris’ wide boy city financier, Petunia’s grasping, greedy social climber to the real star, Orry, otherwise know as The Oracle, cleverest pig on the planet its all so silly that it somehow works, and had me sniggering at the unlikely events.
Of course there’s a serious side in that Tarquin is engaged – to a woman, and his other inclinations go unknown, and what will come of that. Then there’s the terms of Chris uncle’s will, Chris has only a short window to act if he’s to keep the house and money, and it not go to his elderly uncle’s latest floozy… And just what did happened between the Hardcastles and the Boughs all that while ago?

Stars: Five, Its a wonderful, sniggering farce, with a spicy and sensual romance wrapped up in it. I thoroughly enjoyed it. A fun read to drive away winter blues.