Before and After, The Incredible Real-Life Stories of Orphans Who Survived the Tennessee Children’s Home Society, Judy Christie, Lisa Wingate

Before and After, The Incredible Real-Life Stories of Orphans Who Survived the Tennessee Children’s Home Society, Judy Christie, Lisa Wingate 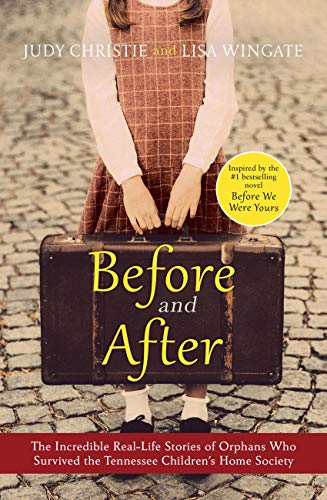 I loved Lisa’s Before We Were Yours, a heartbreaking story, and after publishing it she was contacted by people who until they read it didn’t realise they were part of the huge scandal, the selling of children. What an awful thing to learn.
Lisa decided to research more into the real stories, the awful business Tann ran, stealing children and selling them as orphans…..over 5,000 children stolen, often to a tailored description of the child wanted. We saw in the first book how those poor kids were taken, treated so harshly, how many of them died, and those that survived were treated as part of a for profit business by Tann. Its a horrific story, shocking how easy iot was for her to get away with it, how many people must have suspected even if they didn’t know, just what was going on. The poor kids too, taken from parents they loved, and treated as objects, no thoughts to how they felt, just how much money they would fetch. Families split up, so not only did they lose parents but siblings too.
Its makes heartbreaking reading, some of these real life stories, but at least many of those folk who’d always felt “outside” their families now have a sense of understanding why, and some were able to trace siblings. I still find it hard to get my head around the scale of the business, how it went on for so many years. As Edmund Burke says “All that is needed for evil to flourish is for good men to do nothing.”
Its a hard story to read at times, but with moments of lightness when things go right, and hopefully shining a light on this atrocity will help prevent future ones. Those children though, will never get that time with their parents back, had their lives changed irrevocably. They may have had good lives, but it still wasn’t the life they were meant to live. I had to read this in sections, it was just so emotional in parts.

Stars: Three, an emotional read, the story behind the story. I had to read in stages, I found it incredibly moving and I just kept thinking “what if?” what if someone had said something when it first started. We can’t change the past though, only hope it influences the future.

Tags: Before and After, biography and memoirs, Judy Christie, Lisa Wingate, The Incredible Real-Life Stories of Orphans Who Survived the Tennessee Children's Home Society