The Captain and the Prime Minister Catherine Curzon , Eleanor Harkstead

The Captain and the Prime Minister. Catherine Curzon , Eleanor Harkstead 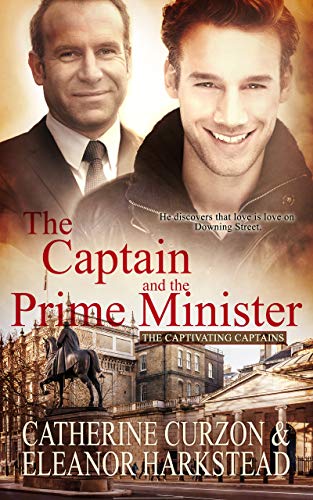 I really enjoyed this. I’m not convinced by insta-love stories but in this one, although when they do take that step and go from 0-60, they have known each other a long time, and Tom has been part of the family for years so it wasn’t an issue.
I loved them both, Tom, strong ex soldier, but a softie with the twins, and Alex who’s been through so much while in the public eye, misses his late wife still, but discovers his feelings for Tom are more than just friendly. That part was handled so well, it wasn’t a “turning a straight guy” story, but one where Love was the focus, not the gender of either of them. I always think in those Straight guys stories, that there must have been some leanings, you can’t “turn” a straight guy any more than you can turn a gay person straight.
Publicity – it doesn’t get much more public than being PM, with the press focusing on every move. I’ve written before how I hate the way the media just love to dig out anything they can make sound salacious – the TV interview was so very well done. I could see those questions being asked by someone very like the presenter portrayed in the book. Its all “in the public interest” excuses when in fact unless the PM was heavily against gay rights it wasn’t anyone’s business.
Given how many folk are LBGTQIA its a wonder there aren’t more in the Gov, maybe, as in football and some other celebrity occupations, they just hide what they are. Justin Fashanu, the first openly gay UK footballer, had a really tough time, being adopted, and black also. Brave kid, sadly died too young, but it amazes me that out of over 800 premier league footballers currently not one is openly gay. I suspect the media furore people in the public eye face when they come out is what prevents them. That’s pretty damning in 2020 that some still feel they have to hide who they are 😦 It made the press scenes, the way events and texts were twisted, in this book feel very real, though sadly I think in real life the endings would have gone down differently.

I understood how Alex’ in laws felt, understandable, and was so glad that worked out. I loved the way the twins were told, and that’s how it should be, no big deal, just everyday life. Kids are accepting, its adults who have issues.
Alex and Tom both had some tough decisions to take, a big risk for them both if they got it wrong.
Its a lovely story, touches on reality, but with a happy ending, which I need, not the sadly unhappy one I think reality would bring 😦 we have a long way to go, but at least are going in the right direction.

Stars: Five, a lovely read, one I wish real life was more like.