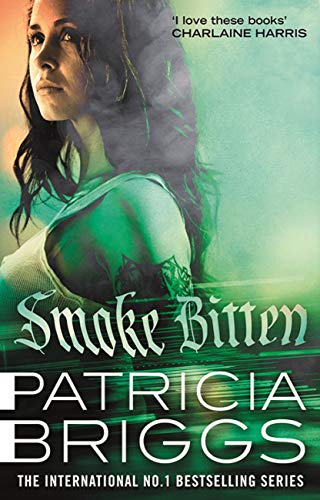 Well, wow! This series continues to grow, each book building upon the whole story. With some ongoing series its clear at a certain point they’ve run out of steam, but this one has plenty of potential stories yet.
Patricia Briggs is my favourite author, this series my number one closely followed by her alpha and Omega novels. I could – and have- read them over and over, seeing this I missed each time. This twelfth book still feels as fresh as the first one.
There are so many fantasy reads out there in book-world, some excellent and some ( only imo of course) are just dire. I’d love if Patricia could write faster, I could devour everything she puts out, but what makes these books special is the realistic characters ( even though the are anything but real!), the solid story, the multiple plots, the carefully woven links that grow through each book, and that takes time. I’d rather wait and have quality to read, than for the series to have more books but devolve into some of that dire writing. Actually I don’t think Patricia could ever write like that, its just not in her. Thankfully.

Well, another puzzle for Adam and Mercy here, and as usual there’s not just one plot but multiple ones. A weird and incredibly dangerous creature no-one knows much about, that may have escaped through the door Tilly opened in Mercy’s back yard, some strange werewolves in town, and problems between Adam and Mercy, not with their relationship but which could affect it.
Its always a treat trying to work out just how Marcy and Co will resolve things. Because although Mercy is always the driving force, she’s aided each time by her pack, her friends and somehow she always ends up in the firing line.
I love that we see so many of the old characters here, along with the new ones. I can see how things from earlier books have led to relationships – not friendships but those kind of connections that prove very important when Mercy needs them. As well as the tension and danger, there’s the usual fun and games, the day to day issues that make the story feel grounded and balanced. Fae bargains have to have balance, and for me books need to have balance too…
With some authors I feel they write themselves into plots that only magical solutions will get them out of, and when they just pull those out of a hat, do things no-one has heard of, that have never been mentioned and don’t have any real connections and – bingo- everything’s fine, I feel cheated. With this series though the magic is part of it, and though Mercy has no magic per-se, she has those connections, the Fae, the vampires and of course Adam and the pack, with the Marrok always in the background, and of course her own special heritage from Coyote. When there’s magic involved it always follows set rules that have been brought up in earlier books, so I don’t feel its some new, unheard of superpower solution. Mercy and the pack bonds feature strongly here, and her being pack but not pack, being coyote and something different, means her pack bonds are different too. I found that part really interesting, had me visualising what Mercy was seeing.
I love that Adam has some problems here. I adore the man, the perfect mix of gorgeous, charming, Gentleman and sex, and sometimes guys like that need a few issues to make them real. There’s one point where I was really almost tearful at events, very much moved, and also very much angry that things had gone so far.
Once more its like meeting old friends, and knowing their individual strengths and weaknesses ( Aurielle and Christy!) I can see how they will work in the story. I guess my big fear is that the constant dangers to them mean each book maybe is the last for some of them. We’ve seen people die in previous books, it happens with the constant pressures, it can’t be just the bad guys that die, that would make it unbalanced. The fact so many have died or left the pack because of the dangers is brought up here. The Colombian Basin pack is noticeably smaller, and that brings in vulnerabilities. My heart was heavy that it might happen here to two longstanding characters, and that fear is what makes it real. And I’m not saying if they died or not 😉
So, I finished this yesterday and am already thinking – read again or go the whole hog through the series – I know that these books can stand that constant re reading. Maybe I’ll do both 😉

Stars: five, a cracking read, perfectly paced and balanced, and gave me a story to lose the real world for a time. I adore these books, fingers crossed there’s many, many more to come 🙂