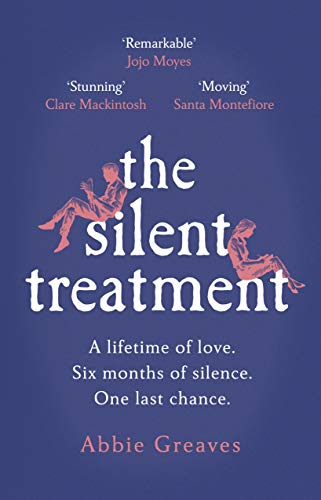 I really didn’t know what to expect, the description is tantalisingly vague. All I could think was Why? Why didn’t Frank speak to Maggie? Did she speak to him? Had they rowed? What on earth had happened to carry this on for so long?

Well, that answer comes slowly, little by little as we learn about Maggie and Frank’s life together. Its clear they adored each other right from the start, from that first meeting up to now, even though he’s not speaking – and I was just so intrigued the more I read.
They were so close, one of those couples who were really perfect together, who complement each other. They had some setbacks in life but it seemed to bring them closer, so where, how, why did it all go so very wrong?
My first though was that maybe one of them has an affair or something, but it quickly became clear that neither would do that, and I just couldn’t think of what could have prompted such a long silence, especially when it doesn’t seem to be an angry or resentful lack of communication, not held out as a punishment, but simply a lack of speech, and I found it such a puzzle.

Its a beautiful story, very easy to read and engrossing, very moving, very emotional and yes, like other readers it did make me cry.
Yet the big question of why, which maid it such a mystery also began to frustrate me. The more I read the less I understood, until pretty close to the end, and I did find that a bit disheartening, wondering if when all was reveled it was going to be anti climatic.

I did feel the last section wrapped up a little too quickly, after that long, drawn out story of questions, it felt as if I was given the answer I’d been waiting all through the story for, quickly followed by a tidy, neat wrap up. It felt a bit too slick after the way the main story was so carefully drawn out, as if the two didn’t really work together. This is one of those books I enjoyed, am glad I read but which I doubt I’ll reread. ,G

Stars: Four, a moving, easy to read story but I felt there was a disparity between the main part being so slow to reveal and suddenly , story out, reasons disclosed and bam, neat ending. I needed a little more than a quick, slick conclusion.