On Common Ground, Book 1 in the Grounded Series, Jansen Schmidt

On Common Ground, Book 1 in the Grounded Series, Jansen Schmidt 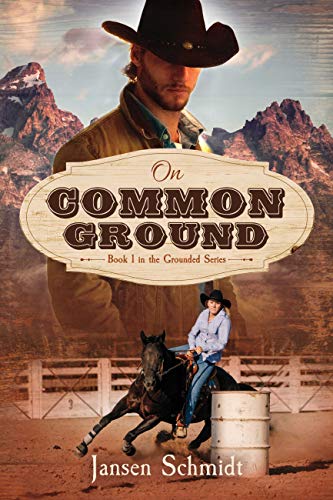 I really like the sound of this, its ages since I read a western themed romance, and I really liked how this sounded.

Sadly I find I’m out of step with the majority of reviewers who loved this book. I’ve got to 40% and I just can’t continue. There’s a fine line between being a sexy alpha male and a man who isn’t listening to what a woman wants and is just imposing his own wants on her and for me that’s what Trevor is doing. Right from the start his old friend Rocky warns him off Ketra, and from what he sees she’s very skittish, very wary around men. So what does he do? Well, he fancies her so he pushes, and pushes even when its clear his attentions are unwanted. To me he was no better than another person who does a similar thing but as Trevor is the MC, handsome, sexy etc he gets a free pass. Not from me. There’s one part where she’s sick, raging temperature, vomit splattered hair but as he helps her to the bathroom her robe slips and he’s almost salivating at the sight of her nipple. That just doesn’t cut it for me, sick not sexy.

Ketra annoyed me too, she was just plain rude to Trevor even when she didn’t know him, wasn’t the subject of his unwanted attentions. On one hand we have a traumatised women, scared of men – but working in a ranch as what seems to be the only woman there – and yet one look at Trevor and she has the hots for him? Its been two years, and she’s been working among men all that while, I’m sure she’d have learned some bit of being able to get along with most men by now. I know abuse can leave traumas that take years to accept, and one never actually gets over it, but learns to live with it. I’m just suggesting that in the environment she’s in I would have thought Ketra would have been able to deal better. I struggled with the inconsistency.

I did stop about 20% in, but decided I needed to give it more chance but I just can’t finish it, I am too angry about Trevor’s behaviour and Ketra’s flipping back an forth, scared female to has-the-hots-for-Trevor…..
As I said, clearly I’m in a minority and these things don’t spoil the story for other readers. That’s fine, we’re all different, want different things. Maybe you’ll be able to ignore or excuse the bits I can’t and love this book too, as other reviewers have, maybe like me you’ll feel Trevor’s behaviour borders on his own wants and needs, rather than looking for what Ketra wants. Horses for courses really is an apt saying in this case. Its not a bad book, just characters that don’t suit me personally, you need to asses if its your style.

Stars: Two, DNF, only got to 40%. I found the characters behaviour not what I cold accept. My issues though, others love it.

2 responses to “On Common Ground, Book 1 in the Grounded Series, Jansen Schmidt”