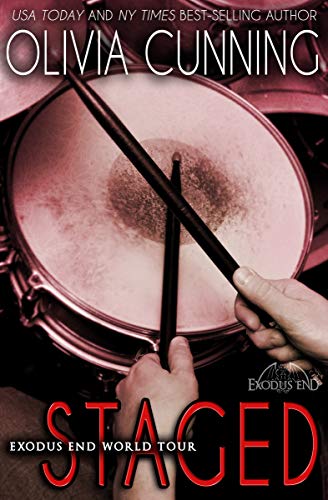 Way back when I got my first kindle I found a free book I liked the sound of. It was Brian and Myra’s story, the first Sinners book. I loved it and went on to buy the rest. I wasn’t so taken with the Sole Regret novels, liked them but as one off reads. I was so keen to read Exodus End books, having met Dare several times in Sinners novels. I’m still keen to read his story, he’s a solid, quiet, unassuming guy, and I think his novel will be special.

Still, we’re book three into Exodus End, and I’d expected to devour this story. I’ll be honest, Steve wasn’t one of my favourite characters, but we see some suprising depth to him here. At first though I really disliked him, sulky and sullen, whining because his best friend’s band has been replaced as opener, and the way he treats ladies….yep, he was misogynistic. Speaking of his best friend, Zach is a great character, and though he’s not involved in any of the bands so far, I think he has a great story in him.

I really wanted to like this story, but it took a while before events of last two books came to me, its been a while and several hundred novels since I read them. As well as the characters we already know, there are quite a few new ones. I did find this and some of the plot-lines a bit confusing, and at times the story was hard to believe, mainly the Tamara/Bianca/Susan aspect.
I felt too, that in this book the sex became the story – its fine for many readers but not me. In other novels the sex has always been to the fore, these are very erotic novels after all, but balanced with solid plots. Here the main plot seemed pretty thin, much of it only developing in last part of the book, and at a pace that felt rushed. I felt there were pages and pages and pages of sex, interspersed with a little bit of story and then yet more sex. To be honest after a while its gets boring, there’s only so many times I want to read about sex, only so many ways to write it without it becoming repetitive. Here it became just mechanics rather then sensual. There were several times when I felt the sex and the conversations about sex became OTT, frankly reading about Roux not being hungry any more because she’d had too much come, ( no I just can’t use the US expression…) and whether it was vegetarian or not was more than I wanted to read. Likewise his request for her to text him everything – even when she was “having a dump”. Really, that’s a good line – or lines, it came up more than once- for the story??

Then there’s That event, which I felt was incredibly serious, sadly happens too often, but between brushing it off or demanding it be reported I felt it wasn’t really given enough time, not the treatment it deserved. When copious pages have been devoted to sex surely a few more could have been spared for this. Its a horrific thing to happen, would it have been treated this way if it happened to a female? I felt it really let down its importance that it was just added almost as a quick filler plot.

Stars: Two. Overall this book wasn’t a success for me. I still love the others and want to read Dare’s story, but this one just didn’t cut it.