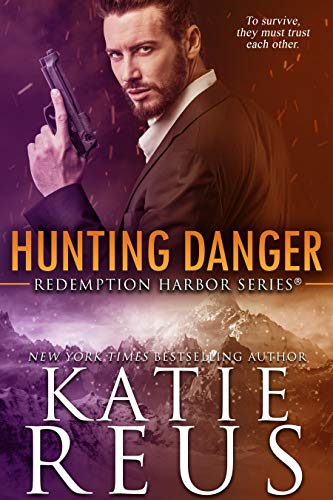 I’d only read book three in this series, each are advertised as stand alone and that one I loved, didn’t feel I’d missed anything by not reading first two books.
I haven’t read book four but when I saw this I expected to feel the same as I did with book three, that it would be complete on its own. It is….and yet I think I’d have got far more from it if I understood more about the whole group of characters, their dynamics and interaction. As it was, apart from Brooks and Darcy they were just names and I didn’t feel the connection between the characters that I know would be there.

Its billed as romance, and it is but for me the romance fell second place to the suspense. Its a tightly written novel, well paced, well set out, but the romance side takes a while to warm up – its very much each likes the other but hides it, and seems as though that’s been going on a long time. Now they’re thrown together, in danger, and emotions run hot at a time like this. Its a question of what happens once that cools down, when they’re thinking with clear heads once more.

Its an interesting story but I felt a bit disconnected from it, as I said I think even though its a stand alone it would work better if I’d read all of the others.

I do occasionally get tired of the “quick computer hack” that takes care of everything, tells where folk are, what they’re doing, spies on them remotely – even when there hasn’t been time to set up cameras…and of course knocks out those cameras who see what we don’t want them to.

Its not just in this book, but a growing trend in many suspense reads. PCs can do lots, are a huge asset but they are machines, not miracle cures and I felt here that it was something a little over-used.

Stars: Three, a good read but would have been a great one if perhaps I’d read all the earlier books.